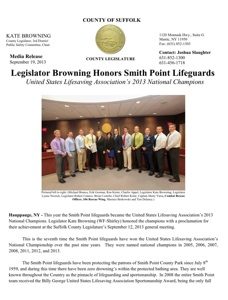 The Suffolk County Legislature wishes to join the citizens of Suffolk County in recognizing The Smith Point Lifeguards as the United States Lifesaving Association’s 2013 National Champions.

The Smith Point Lifeguards have been protecting the patrons of Smith Point County Park since July 8th, 1959; during this time there have been zero drownings within the protected bathing area and to date 26,762 ocean rescues have been performed.

The United States Lifesaving Association is America’s nonprofit, professional association of beach lifeguards and open water rescuers. USLA works to reduce the incidence of death and injury in the aquatic environment through public education, national lifeguard standards, training programs, promotion of high levels of lifeguard readiness, and other means.

Smith Point Lifeguards are well known across the Country as the pinnicle of lifeguarding and sportsmanship. In 2008, SPL, received The Billy George USLA Sportsmanship award being the only team-chapter to ever receive this honor. Chief Bob Kolar also received The Billy George USLA Sportsmanship Award in 2013 as well as lifeguards Kevin Kolar and D.J. Simonton, jointly received the 2013 NYS “Joe W. Dooley” Lifeguard of the Year award.