A study finds that although the “wilderness breach” created by Hurricane Sandy in 2012 has reached a relatively stable size and location, the channel and shoals will keep changing in response to weather. Related research shows the breach isn’t likely to increase storm-tide flooding in Great South Bay.

A new U.S. Geological Survey study of a Hurricane Sandy-created opening between the ocean and Great South Bay at Fire Island National Seashore is one of the most detailed scientific examinations ever conducted of the early stages in the life of a barrier island breach. Computer modeling based on the study’s data finds that the breach has not significantly increased the projected level of storm-tide flooding in Great South Bay.

The study highlights the dynamic relationship between storms and coastal barrier islands, pinpointing seasonal changes in the breach’s channels and shoals and the likelihood that future storms will change the opening again.

“Storm strikes are the force that drives the geomorphology –the geologic shape and evolution—of barrier islands along the Northeast coast,” said USGS research oceanographer Cheryl Hapke, the lead author of a USGS report published in September 2017. “But until this event, no one ever had the opportunity to watch a breach open and evolve, and to study that process in depth.”

When Sandy struck the south shore of Long Island, New York, on October 29, 2012, storm waves cut through the Otis Pike Hugh Dune Wilderness Area on Fire Island National Seashore, forming what is now known as “the wilderness breach.” The new channel allowed water to flow between the Atlantic Ocean and Great South Bay.

That was the beginning of an evolutionary process that lasted about 18 months, with the breach moving west and growing rapidly until it reached a state of near-equilibrium, said Hapke, an expert on beach erosion who has been studying Fire Island since 2005.

After the winter of 2013-2014 the breach stabilized, according to the study by Hapke and four co-authors with the USGS coastal and marine geology program. However, “based on computer modeling and past observations, we know that the breach will change when impacted by large storms” such as Nor’easters and hurricanes, Hapke said.

Breaches occur naturally on barrier islands. They can cause important environmental changes. An open breach can improve bay water quality by increasing the exchange of seawater and bay water. It can also alter the risk of flooding and affect nearby communities and infrastructure.

The USGS began gathering information on the barrier island’s geologic conditions as Hurricane Sandy approached. Scientists collected pre-storm lidar data – a technology that uses laser pulses to reveal surface contours more precisely than radar – the day before the storm made landfall. The team also analyzed data on Hurricane Sandy’s storm waves, including a reading from a NOAA sea buoy 48 kilometers (about 30 miles) off Fire Island that recorded a wave height of 9.6 meters (about 31.5 feet).

Hapke and colleagues surveyed the shoreline of the breach weekly or monthly for a year after the storm and several times a year thereafter. They also precisely measured the depths and contours of its channels and shoals in three bathymetric surveys between 2013 and 2015. They analyzed the information gathered using state-of-the-art tools, such as landscape evolution models that simulated changes in the terrain within and surrounding the breach, and time-series studies that examined the historical record of shoreline changes in the area. The goal was to understand how the breach evolved, anticipate its effects on the surrounding area, and predict what may happen in future storms.

The wilderness breach, one of two formed on Fire Island during Hurricane Sandy, opened at the site of Old Inlet, a former gap in the barrier island which was open from 1763 to 1825. It followed the path of a boardwalk that was destroyed by Hurricane Sandy, and may have been influenced by the lack of vegetation to slow wave movement under the boardwalk, the study found.

The original opening of about 54 meters (177 feet) widened as seven Nor’easters struck the area over the following year, and eventually reached a maximum width of 573 meters (1,879 feet, or nearly one-third of a mile). That portion of the island was scoured out to a depth of 4 meters (13 feet) or more, and sediment formed a seaward delta and a complex of shoals north of the breach, on the bay side of the island. These natural features continue to shift with the strong storms that strike the area frequently, usually from autumn through early spring.

A computer modeling study based on the USGS-led data collection found the existence of the wilderness breach has increased the rate of water entering the eastern part of the bay, which causes normal high tides to arrive slightly earlier than they did before. It also has the potential to increase floodwaters’ height during storms by up to three inches in eastern portions of Great South Bay, Hapke said. But the vast majority of the water entering Great South Bay continues to flow, in good weather and during storms, through a pre-existing channel marked for navigation.

Information from the USGS study was provided to the National Park Service to help its managers develop a plan for managing the wilderness breach. 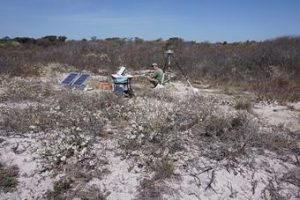