Waterspout off of Cupsogue Beach

This is very unusual for Cupsogue and/or Smith Point or any other south shore beaches.

Waterspout off of Cupsogue Beach moving towards Smith Point

A waterspout is an intense columnar vortex (usually appearing as a funnel-shaped cloud) that occurs over a body of water. Some are connected to a cumulus congestus cloud, some to a cumuliform cloud and some to a cumulonimbus cloud.[1] In the common form, it is a non-supercell tornado over water.[1][2][3]

While it is often weaker than most of its land counterparts, stronger versions spawned by mesocyclones do occur.[4][5] Most waterspouts do not suck up water; they are small and weak rotating columns of air over water.[1][6] 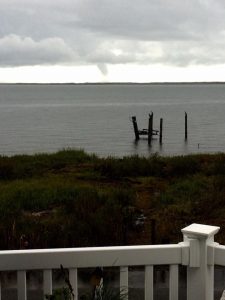 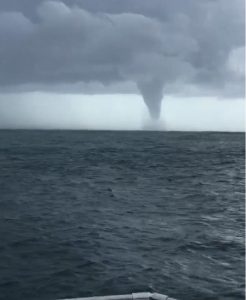