While many of us were looking forward to a kickoff of the NFL season, the South was bracing for the impact of category 5, Hurricane Irma. Several members of the 106 Rescue Wing were already helping hundreds of American citizens evacuate to safety in Virgin Islands. Major Sean Boughal, Alex Triani (2017 National USLA Landline Champion) Mike Hartman and Sal Sferazza were evacuating people in the aftermath of Hurricane Irma.

Marty Viera (2006 Regional USLA 2K Beach Run Champion) was down in Florida with other members of 106 Rescue Wing assisting various local and Federal agencies with SAR. (Search and Rescue).

Smith Point’s finest, as of Tuesday night (9/12/17) helped over 2100 Americans get to safety! Incredible work from our own Guardian Angels. 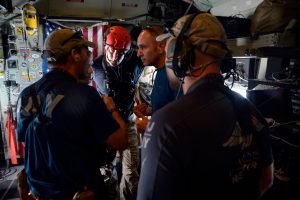