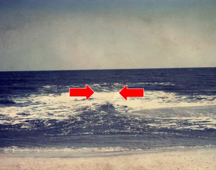 From Wikipedia, the free encyclopedia

Rip current mechanism: breakers cross sand bars off the shore, the water travels back to sea through the gap in the sand bars, creating a fast “rip” current

A rip current, commonly referred to simply as a rip, or by the misnomer rip tide, is a strong channel of water flowing seaward from near the shore, typically through the surf line.[1] Typical flow is at 0.5 metres per second (1–2 feet per second), and can be as fast as 2.5 metres per second (8 feet per second), which is faster than any human swimmer. They can move to different locations on a beach break, up to tens of metres (a few hundred feet) a day. They can occur at any beach with breaking waves, including oceans, seas, and large lakes.[2]

Rip currents are a source of danger for people in ocean and lake surf,[4] dragging swimmers away from the beach. Death by drowning comes following exhaustion while fighting the river or ocean current.

Although a rare event, rip currents can be deadly for non-swimmers as well[citation needed]: a person standing waist deep in water can be dragged into deeper waters, where they can drown if they are unable to swim and are not wearing a flotation device. Varying topography makes some beaches more likely to have rip currents; a few are notorious.

A swimmer caught in a rip current should not attempt to swim back to shore directly against the rip. This risks exhaustion and drowning. A rip does not pull a swimmer under water; it carries the swimmer away from the shore in a narrow channel of water.[1] The rip is like a treadmill which the swimmer needs to step off. The swimmer should remain calm and swim parallel to the shore until he or she is outside of the current. Then, locations to aim for are places where waves are breaking. In these areas, floating objects are generally transported towards the shore.[7]

A swimmer in a strong rip, who is unable to swim away from it, should relax and calmly float or tread water to conserve energy. Eventually the rip will lose strength, and the swimmer can swim at a leisurely pace, in a diagonal direction, away from the rip but back to shore.[4] Coastal swimmers should understand the danger of rip currents, learn how to recognize them and how to escape from them, and swim in areas where lifeguards are operating, whenever possible.[4]