Microplastics found in gut of every sea turtle in new study

Plastic was found in the gut of every single turtle examined in a new study spanning the Atlantic, Pacific and the Mediterranean.

(CNN) Plastic was found in the gut of every single sea turtle examined in a new study, casting fresh light on the scale of plastic pollution in the world’s oceans.

The research, published in the journal Global Change Biology, examined more than 100 sea turtles of all seven species, across the Atlantic, Pacific and Mediterranean.
Researchers from the University of Exeter and Plymouth Marine Laboratory, along with Greenpeace Research Laboratories, looked for synthetic particles including microplastics in the bodies of 102 sea turtles.
More than 800 synthetic particles were found in the turtles and researchers warned that the true number of particles was probably 20 times higher, as only a part of each animal’s gut was tested. 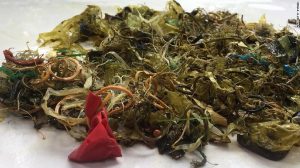 This handout picture taken on June 6, 2018 and released by the Marine and Coastal Resource Research and Development Centre on June 11, 2018 shows debris removed by government veterinarians from the stomach of a green turtle, a protected species at the marine center in Chantaburi province. – Plastic, rubber bands, pieces of balloon and other rubbish filled the turtle’s intestinal track, leaving it unable to eat and causing its death two days later. (Photo by – / MARINE AND COASTAL RESOURCE DEVELOPMENT CENTRE / AFP) (Photo credit should read -/AFP/Getty Images)

“The ubiquity of the presence of the particles and fibers underlines the gravity of the situation in the oceans and our need to proceed with firm and decisive action on the misuse of plastics,” senior study author Brendan Godley, professor of conservation science at the University of Exeter, told CNN in an email.
The researchers carried out their research by conducting necropsies — animal autopsies — on turtles that had died either by stranding or by being accidentally caught by fishermen. The study sites were in North Carolina, Northern Cyprus and Queensland, Australia.
Synthetic particles were found in all the animals, and the most common sources of these materials were tires, cigarettes, clothing and marine equipment, including ropes and fishing nets.
“This study provides more evidence that we all need to help reduce the amount of plastic waste released to our seas and maintain clean, healthy and productive oceans for future generations,” added Pennie Lindeque, senior scientist at the Plymouth Marine Laboratory, in an email.
David Santillo, from the Greenpeace Research Laboratories at the University of Exeter, said: “The threats to turtles from entanglement in fishing gear and choking on larger pieces of plastic are well known, but the fact that every turtle investigated in this study, across three different oceans, contained microplastics in their guts reveals yet another, previously hidden, dimension to the problem of plastics pollution.”
Lead author Emily Duncan, of the University of Exeter’s Centre for Ecology and Conservation, noted that the effects of particle ingestion on turtles are unknown, as microplastics can typically pass through the animals’ guts without causing blockages.
It is also not currently understood how the turtles ingest the synthetic particles, added Duncan.
However, she said, further research would be required to determine the subtler effects of microplastic ingestion on aquatic organisms, including the transfer of viruses.
“They may possibly carry contaminants, bacteria or viruses, or they may affect the turtle at a cellular or subcellular level,” she said.
Godley said the team are continuing to research young turtles in Australia and are looking at the effects of chemical pollutants on turtles. He noted that one of the possible hidden threats of plastic is the spread of “other chemical toxins through the food chain.”
The highest rate of contamination was found in the Mediterranean, but the researchers acknowledged that the study’s sample sizes and methodology did not allow for detailed geographical comparisons.
It is currently estimated that between 4.8 million and 12.7 million tons of plastic waste could be entering the world’s oceans every year, which is contributing to an estimated five trillion pieces of plastic in surface waters, the study says.
Dilyana Mihaylova, marine plastics projects manager at conservation charity Fauna & Flora International, told CNN that the findings are “not a surprise.”
“Microplastic pollution is widespread in the ocean and when animals eat these plastics the chemicals released from them can cause serious harm,” said Mihaylova, who was not involved in the study. “Knowing where the plastic is coming from is critical in stopping its flow into the ocean in the first place.”
December 6, 2018
Posted in Beach Safety, News