Your last-last-last-minute cheat sheet on Monday’s Eclipse of the Century
By AJ Willingham, CNN

(CNN)In case you haven’t been paying attention (and NO ONE would judge you if you weren’t), there is a teensy weensy little boring astronomical event happening on Monday known as the Eclipse of the CENTURY!!

It’s called such because it’s the first total solar eclipse to be visible to the US mainland since 1979 and, well, in general, eclipses are pretty great. Here’s everything — and we mean everything — you need to know about this event. And no, there are no stupid questions.
When is the eclipse?

The eclipse will take place on Monday, August 21. The total eclipse begins on the West Coast just after 10 a.m. PT and ends on the East Coast a little before 3 p.m. ET.
Okay, but when is it in my area?

Here is an extremely handy interactive map. There’s still time to make a “A Beautiful Mind”-level conspiracy board about the eclipse and what it means, and if you’re interested in that, we recommend making this map the centerpiece.

You can even type in your exact address to see whether you’ll get a good view.
Best places to watch the solar eclipse

How long will it last?
Short answer? About two minutes.
Long answer? It depends on where you are. Illinoisans, rejoice — you’ll get the longest bit of the eclipse in Carbondale. There, the event will last two minutes and 43 seconds.

Will I even be able to see it?
Sooo this is the tricky part. The “path of totality,” or the path of the eclipse under which things will get really dark, extends from South Carolina, up through Nebraska, and passes over the West Coast through Oregon. The path is about 70 miles wide, so a fairly narrow portion of the United States will be in prime viewing spots.
Just because you’re not in the path of totality doesn’t mean you won’t be able to see it, though. It just won’t be as dramatic. 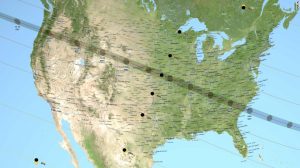 NASA Map showing the path of the “Great American Eclipse.”

What exactly is “totality”?
“Totality” is when the moon completely blocks out the sun. That occurs in that narrow 70-mile path we just talked about, because that area will be directly below the moon’s shadow.
Please don’t judge me, but while we’re at it, what exactly is an eclipse?
There are no stupid questions, remember? First of all, for us here on Earth there are two different types of eclipses: solar and lunar. Solar eclipses happen when the moon’s shadow falls on the Earth as it passes between us and the sun. Lunar eclipses happen when the moon is blacked out by moving into the shadow of the Earth.
This one is a solar eclipse.

READ MORE: Eclipses, explained
Aren’t there eclipses all the time?

Yes, but there are also total and partial eclipses, which are exactly what they sound like. And they also happen all over the world. So the fact that Monday’s event is a total eclipse that we will actually be able to see from the United States makes it a pretty big deal. Remember, we haven’t had a total eclipse in 38 years! 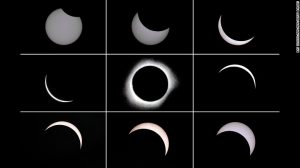 This photo combo shows the moon passing in front of the sun (top L to bottom R) during a total solar eclipse in Indonesia on March 9, 2016.

How will the weather be for the eclipse?
It’ll be pretty hard to say until a few hours before the eclipse, but so far there don’t seem to be any major weather events across the United States to look for. However, a cloudy day can still put a moon-sized damper on your eclipse-watching plans, so keep your fingers crossed, especially if you’re in the Southeast.
READ MORE: Detailed forecast for Monday’s eclipse 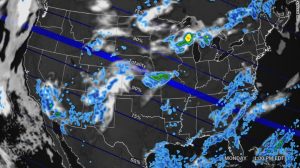 A CNN Weather high resolution model for the hours during the total solar eclipse on Monday.

Do really I have to wear glasses so my eyeballs don’t roast in their sockets?
Yes. Don’t you remember being told as a little kid never to look directly at the sun? Ageless wisdom! You’re only safe staring up slack-jawed at it if you’re in the direct path of totality, AND only for the few minutes the moon is actually in front of the sun.
If you stare at it anyway, you could do long-term damage to your eyes. So please, just wear the funny glasses. Here’s a list of safe options.

So I shouldn’t stare directly, unblinking, at a 10,000-degree ball of fire?
It is not recommended.
Even if it’s cloudy?
PLEASE DON’T.
How to safely view the eclipse of the century

How to safely view the eclipse of the century 01:25
I plan to be in a cave/ trapped in an underground bunker/ performing surgery and won’t be able to go outside. How else can I watch it?

May we humbly suggest CNN’s VR experience for your day-of viewing? We’ll also be broadcasting live on Facebook from various points of totality. It will be a rager!
If you can’t put your scalpel down during the actual eclipse, rest assured everyone and their mother will be posting pics and videos of it online. You will not miss a thing, whether you want to or not.
This sounds like a traffic nightmare. Am I right?

Total. Gridlock. Especially in the areas of totality, where thousands of eclipse-chasers will flock to catch a glimpse of the darkness. Local leaders are telling people to arm themselves with food, water and a full tank of gas, and they are anticipating the worst traffic directly after the eclipse as people return to their normally-scheduled lives.

Also, be aware that if you’re on the road during the eclipse, chances are plenty of motorists will have forgotten this is happening and will be like “WTH” as the sky blackens.
Look, I am a rational person. But this is my first solar eclipse and I am not ruling out the possibility that, when the moon blocks out the sun, day plunges into night and the beasts wail like men, I will be unreasonably terrified on an organic level. Please make me feel better about this fact.

If you think YOU’LL be scared, think of our ancestors who had no idea what was happening! Especially people who worshipped sun gods. Did they just think the dude took a sick day?
How animals react to a solar eclipse

How animals react to a solar eclipse 01:21
Yes, ancient cultures often connected eclipses with fear, dread and bad omens. Some ancient Mesopotamians thought that eclipses foretold the death of a king. Eventually, the ancient Greeks and other world cultures learned what eclipses were and how to predict them. But it was touch and go there for a few millennia and KNOWING what was going to happen didn’t purge all of the interesting superstitions people had about them.

READ MORE: The history of solar eclipses
In short, no judgment. Eclipses can be pretty emotional events.
Wow! I think I know a lot about eclipses now.
Oh yeah? Why not take our quiz then? No pressure.